Open Source Music Volume 3: (I Can Feel Myself) Getting Over It


Features multi-track isolations (stems) from “(I Can Feel Myself) Getting Over It” that you are free to sample/use in remixes royalty-free, and 15 full-length b-sides, covering John’s earliest one-man-space-rock recordings and acoustic demos from when he was just 17.

Open Source Music Volume 2: If I Want You To


Features multi-track isolations (stems) from “If I Want You To” that you are free to sample/use in remixes royalty-free, and no fewer than 22 full-length b-sides, capturing John’s period of turbulent expressionist recordings and early post-rock/dreampop songs.

“A spacey mix of shoegaze and pop with distinct psych influences. A trippy guitar riff floats above a steady bass line and energetic drum beat, reminiscent of classic tunes with a modern twist.” – Earmilk

“John’s light-as-air vocals float through the kaleidoscopic static, as walls of fuzz invade the song and drag it to much darker ground. However, this is before the song’s outro, a maelstrom of swampy effects and the intensified kick drum take things up a notch, showing a considered and intelligent structural progression from the talented songwriter.” – Jammerzine

“Song of the day for August 8, 2017. A graceful slice of melancholic indie rock. Sublime.” –Wee World

“Swathes of tremolo bounce back and forth on the instantly trippy timbre of Dylan’s guitar work for his latest single, ‘If I Want You To’, taken from the upcoming album, Peripheral Drift Illusion. Having solidly confirmed himself as a force to be reckoned with in the world of up and coming alternative artists, Dylan boasts a plethora of instrumental skills to his name which he has put to best use on the new single that sees him diverge from the jovial, upbeat jaunt that was his debut effort, ‘Get Beyond’.” –Muisc News

Open Source Music Volume 1: Get Beyond


This is the first release of the “Open Source Music” series, and its 75 tracks include:

“Spill Track of the Day for June 20, 2017. …[A] spacey, effects-laden piece of shoegaze-pop… Dreamy vocals combine with a bright, bouncing guitar riff that drifts effortlessly over a wah-fuelled bass line, before wading through a sludge of distortion. As a result, John takes us on a sonic odyssey that stops off at almost every genre and style on the way.” – Spill Magazine

“To restrict John Dylan’s style to a singular genre would be an impossible task that would not nearly give John’s sound the credit and recognition that it deserves.” – Frequency 21

“Get Beyond is our first glimpse into his upcoming album: Peripheral Drift Illusion, and what a beautiful glimpse it is. From the outset we are lifted by electronic waves of gentle guitar tones supported by the catchy rhythmic rumble of drums and bass. The electronic-funk introduction, with its psychedelic undertone, carries us to John Dylan’s expert, intricate and soul-filled guitar skills, serving to build that unique sound that the track boasts. These enchanting isolated guitar notes perfectly introduce us to John’s excellent falsetto vocals, which are then once again accompanied by the earth-rumbling bass and drums, creating a sound that you can’t help but love. The funk of the bass interlaced with electronic, dreamy vocals and lyrics creates a stunning, unique sound..” –Tee-Total Guitar

“Get Beyond at first can seem like an overwhelming combination of sounds before blending into dreamy vocals with a bouncing guitar riff drifting over a wah-fuelled bass line. The transition is a perfect example of how the song takes the listener on a sonic odyssey that makes a stop at many genre styles along the way. Due to this it would be criminal to confine John to one single band or artist in comparison even as it’s obvious where his inspiration shines from. “ –Music News Today

Fan Club Exclusive: Inside Get Beyond 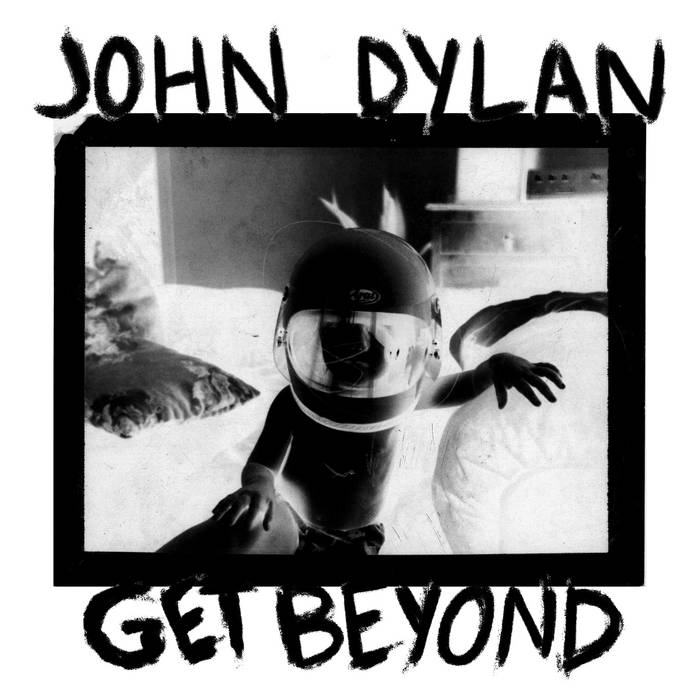 This 18-track fan club exclusive chronicles the evolution of “Get Beyond,” which began life as a riff and a title, “Kashmiri, Queen De La Sahara,” then became a pop track called “You Can Get Beyond,” before merging with a separate song called “What’s Wrong?” and becoming the multi-part odyssey known as “Get Beyond.” All of these songs are provided, plus you’ll even hear the unfettered musings about “You Can Get Beyond” John dictated into his voice recorder (possibly while a bit stoned), imagining what it should sound like. You’ll also hear the original demos, the test take from when John was thinking he would play a live drum set on the album, and all the rough mixes of the album version.

There is a $5 USD/month membership fee, which is a lot cheaper than what all the upcoming singles and album will cost individually over the coming months, so c’mon in!

T-shirts available for men, women, and kids. There are both light fabric and dark fabric shirts, of various colors. Orders fulfilled by Amazon.


The second album from my old band Terrene. A decidedly more poppy affair than my solo stuff. Produced by Phil Ek (Built to Spill, The Shins, Band of Horses). Yielded the singles “Unwelcome” and “Fifty-One” and a 6-week North America tour. The video for Unwelcome, directed by the Nee Brothers and starring Adam Nee (Drunk History), won “Best Indie Music Video 2008” in the Yahoo! Video Awards, which are no longer a thing.

“An exquisite work of art… The word “terrene” may mean “of or relating to the earth” but Terrene, the band, sounds anything but earthly. The echoic guitars chime beautifully with soaring harmonies whirling in from all directions, and every sound is obscured lightly by a lucid haze of reverb… Attempts to pigeonhole or compare Terrene’s sound with established genres and artists usually result only in Frankensteinian conglomerations of eclectic bands – a tooth of Sonic Youth, a couple toes of Sigur Ros, a Flaming Lip, maybe a few Blonde Redhead hairs sticking out somewhere, etc. – but these stitched generalizations do no justice…” – Three Imaginary Girls

Free-forming, melodious songs that feel as if they’re barely planted on Terra-firma…They have something going on unique unto themselves… –Lost at Sea

If only a band existed that distilled the best bits from the Shins, The Apples in Stereo and Built to Spill and in the process arrived at a perfect sonic constellation. Well, Terrene’s new album may just have arrived at this superlative juncture. –mp3hugger

Mars Accelerator - Clouds For Your Y-Axis


Ocasek was a duo that I was in as a teenager living in Oklahoma, with Brad Rose (Altar Eagle, Foxy Digitalis, Digitalis Industries). Psych-rock/shoegaze, hazy folk, futuristic synth folk, and other ecclectic approaches to songs are abound.

You may enjoy if you can get past our “awkward-phase” vocals.